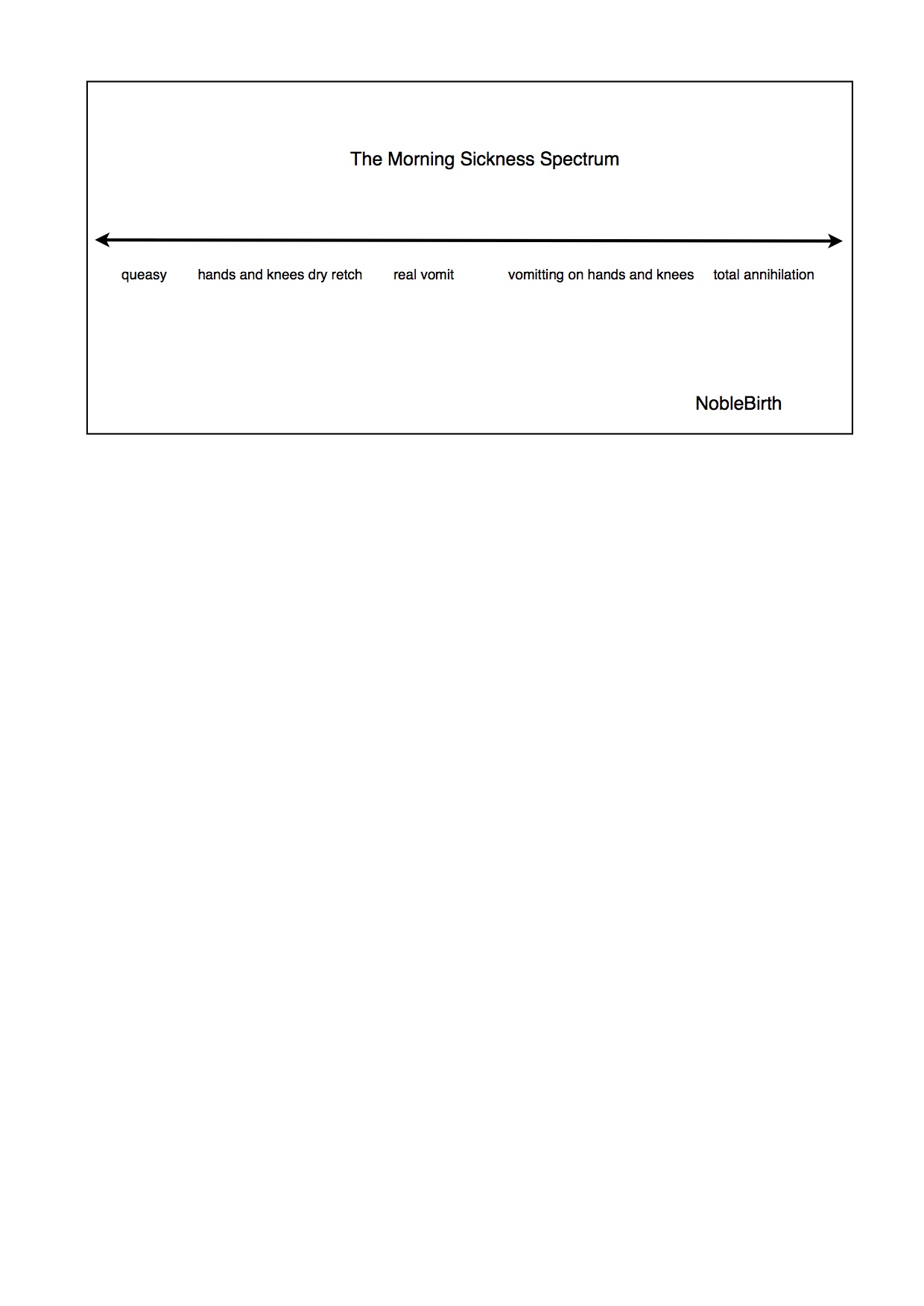 Morning sickness indeed sucks! For many women it does not happen exclusively in the morning.Many of are happy to call it All Day Sickness or ADS for short and on top of that it is supposed to finish around the 12 week mark which again for many simply does not happen as it keeps on going for weeks and weeks after that time. 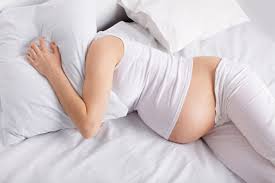 I had pregnancies all involvingwhat I deemed to be the worst morning sickness ever. In fact it was ALL Day sickness and only went away when I was asleep. It was like I was constantly salivating, feeling like I would vomit in a heartbeat (I could only dry wretch) and it zapped all of my energy. I found myself repeating HCG over and over in my head like some kind of chant.. “H-C-G- Human- Chorionic- Gonadotropin” is actually a long mantra I know but somehow made me feel better while I said it repeatedly. HCG is thought to be the major culprit in morning sickness, the American Pregnancy Association says, HCG is “made by cells that formthe placenta. In general the hCG levels will double every 72 hours. The level will reach its peak in the first 8 – 11 weeks of pregnancy and then will decline and level off for the remainder of the pregnancy.”

Morning sickness is on a spectrum of hyperemisis one end is actually feeing queasy in the morning  and the other end  involves hospitalisation and an IV. drip. This is known as Hyperemesis gravidarum (HG) and is pretty serious stuff.Lets start at the worst kind and work our way back form there.

Carol  Lawson,who now lives in Japan, describes her morning sickness as “eight weeks lying on floor throwing up, losing weight fast, goodbye to waist-long hair cut off no strength to wash or comb it, rehydration drips twice a week not enough, emaciated; fostered toddler out, into hospital for life on a drip with nil by mouth for two more weeks then it STOPPED; BLESSED with bouncing twins together weighing 14 lbs (over 6 kg) nearly six months later. WORTH IT.”

This kind of illness in pregnancy is nothing to be laughed at or disregarded of course it’s serious and we are lucky we have highly trained obstetricians to help us through these frightening times.

Allyson Seaborn seemed to be at the far end of the spectrum too when she tells us she “Threw up every day for nearly 8 months. Actually LOST weight during pregnancy. Spent many days in the hospital on a drip. The only thing that eased the sickness was McDonald’s. Seriously. A cheeseburger and fries a few times a week pulled me through. I gave birth to a McBaby”

A little further along the spectrum are the actual “spewers” as opposed to the “dry retchers” . The poor spewers are placed in precarious positions having very few options to release the hounds so to speak Debi Slinger from melbourne reminisced about her morning sickness as a “spewer. “driving in heavy traffic. Nowhere to pull over. Nothing to be sick into. Except…. My handbag. Upended contents onto passenger seat. Put bag on my lap and that was the end of that bag!”

Romy Myer in Saudi Arabia tells us she “Was about to pay at the lingerie section of H&M , Mall of Arabia. Had to excuse myself to puke in front of H&M outside in the mall :((“

Personally I fell into the early to midline of the spectrum, but for me it was pretty awful. I had attacks of violent nausea in so many public places it was embarrassing. Let’s see ………. The Big Banana in Coff’s Harbour I found myself on my hands and knees outside the souvenir store,whilst at my desk at work in Sydney(because my colleague ate tins of Tuna for breakfast) and i was “sensitive to the smell” , driving in the car after a whiff of stale MacDonald’s chip oil dr along Bridge Rd in  Richmond, hmmm lets see oh at a function while I was asking for a new job……………………….. oh hang on that was breastfeeding story my boobs sprung a leak at about 8pm while I was begging for a new job, I  had two massive wet patches on my white ”blouse”  not to mention milk dripping down the table and squirting my neighbours dinners……… so back to morning sickness… I lay on my floor at home for what seemed like hours, I couldn’t brush my teeth without both gagging and bleeding from the gums. I felt tired, grumpy, couldn’t wait until bed time where  I would get a reprieve from it and  I dreaded getting out of bed  the next day to face it all again. I vehemently detested  the women who triumphantly said they felt fantastic and envied the ones who got an IV because they actually vomited and lost weight and became dehydrated. I know that sounds bad but I was in the middle ground no vomit just constant nausea so people didn’t really believe I was ”sick” at least those girls had something to show for it.******. Although having read Carol’s quote I wouldn’t wish that kind of morning sickness on my worst enemy! I am so thankful i was not a chronic spewer.

I  did beg my obstetrician to help me  reduce the nausea just so I could go to work during my last pregnancy. He offered me suppositories. I said “I am not sticking those up my arse!” to which he said “fine keep drinking your ginger tea then and see how that goes for you”( or something along those lines but  in a  strict medical professional manner) , so I snatched the prescription and ran to the chemist. I stared at the packet for days, I thought how the hell was I going to stick that big pill up my bum? Well eventually I caved and did it and guess what I still felt sick!!! arghhhhhhhh so ripped off but in all fairness the nausea was decreased enough that I could go to work without being on my  hands and knees so it did work (kind of). I just found  that I ate more muesli bars and drank more tea!

Gorgeous Russian mother Ekaterina Baranova, has the funniest tale of morning sickness( ADS) she says “I can share stories about whole-day-sickness, for some reasons morning only is not my case:) I feel sick anytime when hungry (being pregnant I mean). During my first pregnancy I only felt sickness during working days and never during weekends!”

So  if you were like me on your hands and knees dry retching at least 20 times a day  then maybe you googled like a madwoman between the sickness and curling up on the floor in a fetal position. Google said things like

Lucky for me the sickness went away in two pregnancies at about 16-18 weeks. (we had a miscarriage for our 2nd baby and will write about that another time) However at the time of morning sickness some of the suggestions just didn’t work.

So what about the advice?

Eat small meals ok .. well in theory this is possible but to starve off the “sickness’ I would have to eat about 50 small meals a day!  Truthfully the dry crackers like Bretons, Saladas, Sao’s and Jatz crackers did make me feel 500% better.  It just was not possible to  eat so much all the time it was like being an all day binge eater….  I will say in my first pregnancy the muesli bars of the chewy variety were wonderful but I stacked on about 30 kilos!!!

There are always those of us who are turned off by foods and certain smells there is research to suggest that the nausea created by certain foods is an adaption we have developed to keep us safe from potentially harmful foodstuffs. Marti Lambert gives us a little insight into “aromas” that created the ill feelings for her. In her first pregnancy whilst in Hong Kong she was  “feeling a little nauseous around the smelly Chinese Markets. But this time…(in Ulaanbaatar Mongolia)  WOW vomiting up to 3 times a day until 19 weeks. The worst being whilst staying with the in laws and waking up to the smell of dogs every morning, which really didn’t help! And you can’t say anything when trying to be polite as a guest in someone else’s home!”

Certain things around us just set us off and there is very little we can do about it at times those things are beyond our control. I remember many things smelt like Cat wee to me when i was pregnant and that worsened my nausea.

Anyway there is also the following to try out as well.

Drink Ginger Tea. yep well after drinking Ginger tea every 30 mins you get over it pretty quickly!   so mix it up by swapping with peppermint tea!!! I found freshly grated ginger with lots of honey to be the best.. unfortunately it means more trips to the bathroom

Rest.. yep well when you are exhausted from dry retching resting is easy BUT when you have to work or run around after an older child well resting is not so doable BUT a 5 minute catnap or listening to a 10 minute relaxation CD can be revitalising and extremely good for you on many levels. I recommend NobleBirth Place in Nature Audio download!!! of course.

Acupuncture all I can say is do it because Nicole Pawley said so. She is our finest NobleBirth educator and a fully qualified pre and post natal acupuncturist.

Acupressure here’s a diagram I got from the net. My brother used to get really bad car sickness and my mum made him wear special acupressure bands she got at the chemist( 30 years ago) they worked a treat.so give it a go

Hypnosis, the experts say that fear about childbirth can lead to increased morning sickness. well it does make a bit of sense as fear effects our hormone release so by all means make an appointment to see a qualified hypnotherapist or download my audio, NobleBirth  Fear release for pregnancy labour and birth . I have to plug my own product as its darn good!  well they say we should shift our focus form a place we don’t want it to be to a place we prefer so why not use that premise for your sickness . Do some mediation, take a walk in fresh air, watch a good movie and eat lots of popcorn!

Medication not my field of expertise so will just say the Dr’s need to write a script for anti emetics and you work it out.

Please seek medical advice if you have morning sickness.

BTW, here I am 7 years after my morning sickness cleaning up my sons vomit, he is home from school with a tummy bug. !!